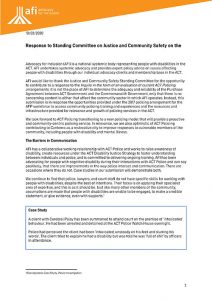 AFI would like to thank the Justice and Community Safety Standing Committee for the opportunity to contribute to a response to the Inquiry in the form of an evaluation of current ACT Policing arrangements. It is not the place of AFI to determine the adequacy and reliability of the Purchase Agreement between ACT Government and the Commonwealth Government, only that there is no concerning content in either that affect the community sector in which AFI operates. Instead, this submission is in response the opportunities provided under the 2017 policing arrangement for the AFP workforce to access community policing training and experiences and the resources and infrastructure provided for relevance and growth of policing services in the ACT.

We look forward to ACT Policing transitioning to a new policing model that will provide a proactive and community-centric policing service. In relevance, we are also optimistic of ACT Policing contributing to Canberra as a restorative city to improve responses to vulnerable members of the community, including people with disability and mental illness.