NDIS changes – be heard before July 9! 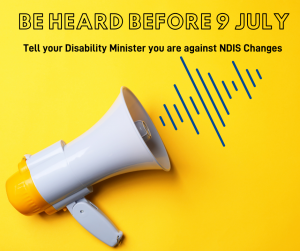 On Friday, July 9, State and Territory Disability Ministers will be meeting with NDIS Minister Linda Reynolds to consider reform to the National Disability Insurance Scheme (NDIS).

Linda Reynolds will be asking our state and Territory Disability Ministers to agree in principle to proposed changes to NDIS legislation. These changes could fundamentally change the purpose and experience of the NDIS.

While the proposed changes have not been shared publicly, they could include introducing mandatory independent assessments, excluding specific items and services under the NDIS, allowing the Minister to exclude other supports and services in the future, and added debt recovery powers.

Nationally people with disability and their families, supports and representatives have opposed these changes and raised concerns that these changes will make it harder to access the NDIS, will reduce support for NDIS participants, and will cause distress to people trying to access NDIS support.

Please contact your Disability Minister before Friday July 9 and tell them that you do not support these changes and ask them not to provide in principle agreement to these reforms.

Below is a written email to help you make your voice heard. Simply copy and paste the message and email it with the email subject ‘NDIS reform – July 9 Disability Ministers Meeting’. Add your own concerns, or add your name to the email and please send it now.

For more information on what changes to look for in the NDIS amendment, check here:

To follow the Hands Off Our NDIS campaign, and for more ideas for action, check out: https://everyaustraliancounts.com.au/

Residents outside of the ACT

You can also adapt attached email and send it to your relevant State or Territory Disability Minister:

Minister for Disability, Ageing and Carers

Minister for Seniors and Disability Services

Minister for Innovation and ICT

Minister for Children and Youth

Minister for Hospitality and EventsLevel 5,