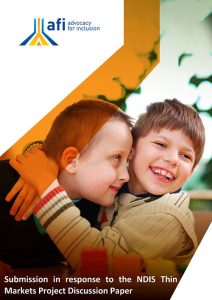 AFI believes the NDIS should be focused on increasing meaningful and tangible support for people with disabilities to exercise self-determination, tied with vigorous accountability, transparency and monitoring systems – with an unequal market distribution, the high risk of ‘thin markets’ is critical and requires to be addressed.

For some, to argue that there is danger in stating thin markets will always be present for the NDIA and that such an attitude is passive in making reform is unrealistic. There will always be a thin market within the NDIA and the limitations in which can be provided for individual participants and their needs that are reasonable and necessary. However, the thin/weak markets that are current now are too broad, and the gaps are too big – reforms to ensure those gaps are filled need to be paramount to ensuring that future thin markets are relevantly as small as possible.

Bluntly, the NDIS cannot provide fund plans for services that are non-existent and expect participants to source them with limited or no supports. In 2011, the promise that “improving access for participants in thin markets is a key objective of the NDIS” which requires “constant vigilance, monitoring and evaluation” remains problematic as this has yet to be actioned.

Fast-forward since 2011, the rushed implementation the NDIS overall has increased the presence and danger of ‘thin markets’, rendering the scheme acute and overburdened by multiple markets. With markets leaving the scheme, no new providers entering due to high costs and risk and the market